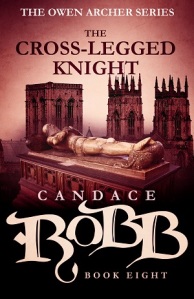 England 1371: a solemn convoy wends its way into York. William of Wykeham, Bishop of Winchester, is bringing home the remains of Sir Ranulf Pagnell, patriarch of a powerful local family, who has died in France. But the family hold the bishop responsible for Sir Ranulf’s death, and ill feeling surrounds his arrival. An accident in the grounds of York Minster nearly kills the bishop.

Then, only a few days after, his townhouse is found ablaze. When the body of a young woman is discovered in the undercroft of the house, scandal threatens to destroy Wykeham. The Archbishop of York, John Thoresby, asks Owen Archer for his help.

The one-eyed spy is troubled. Was the fire an accident or arson? Was the woman trapped or the fire started to conceal a corpse? Stationing guards in front of the smouldering remains, he starts to ask questions. When it appears the dead woman was a midwife known to many of the city’s women, including Lucie, Owen’s wife, his quest becomes personal.

“Robb paints a vivid canvas of a time when courage and chivalry combined.” —Choice magazine