Posted on August 1, 2021 by candacerobbbooks 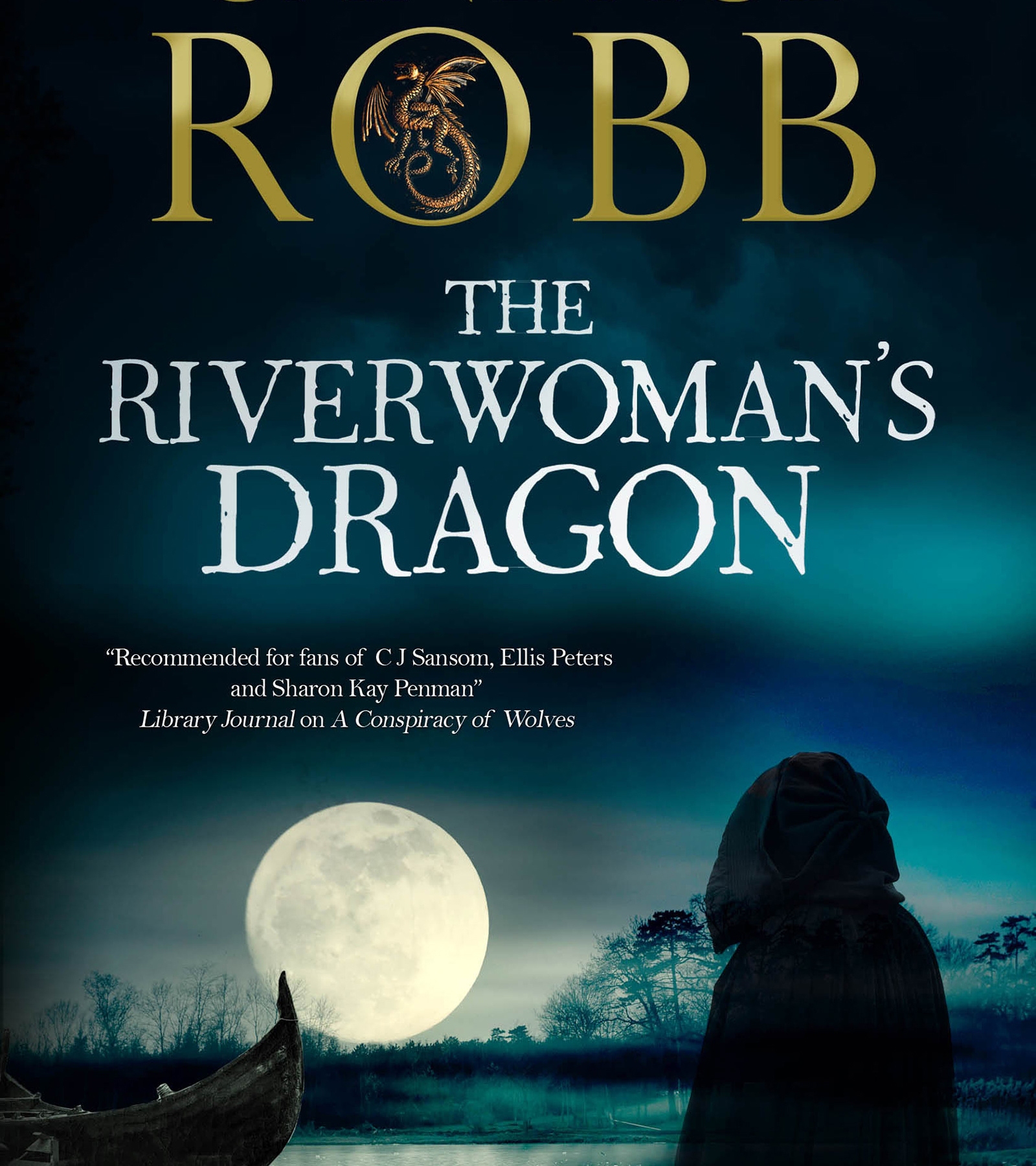 I trust you enjoyed the first 2 installments of Robert Newman’s tribute to Magda Digby the past few weeks; with his permission, I am serializing it as a prelude to the publication of The Riverwoman’s Dragon (Owen Archer bk 13, published 26 August 2021 in hardcover in the UK; 1 October in ebook worldwide; 2 November in hardcover in the US). After today, there will be one final installment. These are Bob’s thoughts, unedited by me.

In this week’s sections, Robert touches on aspects of Magda Digby that I particularly appreciate: her kindness, by which I do not mean niceness, but a genuine wish to be gentle with people, never inflict unnecessary pain, yet being frank; and her skill in listening–as Robert notes: “How often do we ask too many questions and offer too many opinions when folk just want to talk?  How often do we stop listening when we’ve heard what we wanted to hear?” When I write a scene in Magda’s point of view, I am essentially being her, and, in doing so, I am inspired to be more like her. While writing The Riverwoman’s Dragon I’ve been making an effort to be kind and to listen deeply, and, I must confess, both practices are challenging, especially on Twitter–but I am reward by how much sweeter they make my world.

I hope you enjoy part III!

Robert Newman grew up in Freeport, Long Island, where his ancestors arrived from England in the sixteen hundreds.  After completing a Ph.D. in metallurgy he was a university professor, researcher, missionary, and computer programmer.  Since retiring he spent time woodworking with hand tools, bread baking, listening to early jazz, and reading fiction.  Magda Digby spoke to him in different ways during the last ten years and her wisdom guides him in his eighties as he struggles with difficult illness.  He wrote this essay last winter.  Bob lives in Smoke Rise, Georgia, with his wife Spomenka and their corgi Duga.

When the eleven-year-old Alisoun finally comes to York seeking protection at the minster hospital because she fears her uncle, Magda explains to Owen why she is afraid.

“All in her house died [of the plague] but Alisoun.  Mayhap they wonder how she came to be saved.  Fools oft see evil in good.”[i]

Not much escapes Magda, and it seems that many of her statements of wisdom are ever sitting on her tongue, ready to help those around her.  When Owen and Lucie have sent their children to a manor outside the city of York to protect them from the plague, Owen expresses doubts about having done so.  Magda gives sound advice regarding the decision.

“Thou wast wise to send thy children out of York.”
“Was I?”
“Why dost thou yet debate thy decision?  ‘Tis done.”[ii]

I had a very good and wise friend who once told me not to reevaluate a past decision based on present knowledge.  A corollary is that a person must be granted the possibility that a decision they made in the past which now seems in error, may well have been the right decision considering the information available at the time.  Wisdom and tolerance are required here, Magda has both.

When, in response to an inconvenient request, Alisoun, who has become Magda’s apprentice, rises and snaps her skirt.

“Have a care Alisoun.  Thou hast fire in thy eyes  and it is blinding thee.”[iii]

When Owen expresses concern that he is distracted from the task at hand by his anger, Magda offers her wisdom.

“Anger can cloud thy vision.  Remember that violence rises out of fear and pain.”[iv]

Again, she reveals her spiritual and earthy wisdom when her good friend Lucie Wilton is about to assist her with the amputation of a man’s badly burned arm.  Magda believes that a person’s strength comes from within themselves, and that they should acknowledge that.  Furthermore, she is able to see her role in healing from a perspective that many might overlook.

“Thou shouldst not be ashamed to admit thou canst not bear his pain.”
“It is not that.  I have never assisted with such a surgery.  But I believe God will give me the strength.”
“Thy strength comes from thee, not thy god.”[v]

“I could not do what you have just done.”
“Magda thought of the healing she was making possible, not the horror of the act.”[vi]

Owen learns that Lucie Wilton’s apothecary husband Nicholas was taken in by religious visions told to him by Archdeacon Anselm when they were young boys.  Magda’s assessment of gullible folks like Nicholas is ⸻ “Soft eyes, soft head.  Soft-eyes is weak, not evil.”

Magda explains her reason why Nicholas believed the Crow’s visions.

“Magda has watched folks crawl on bloody knees where their saints beheld visions, Bird-eye.  ’Tis powerful stuff for some.” [vii]

She has observed that many people who are devoted to the Church lose their common sense, a weakness that may lead them to make foolish decisions; they are not evil, but they are weak.  They are also not discerning when offered words couched in religious terms.  Not so for Magda Digby.  When a friar comes to Magda requesting her help with a pregnant lover, she resorts to humor, not judgment.

“And how wilt thou pay Magda. Eh, Dunstan?”
“Prayers said for your soul every day until I die.”
“Prayers of a sinful friar?  Even if Magda shared thy faith, she would not count thy prayers worth much.”[viii]

And yet, Magda, in her spiritual wisdom does not dismiss all aspects of the 14th century Catholic Church, and does not dismiss the personal faith of others.  Alisoun explains this to the young nun Marian.

“What she believes is of no concern to me.  She encourages me to honor my beliefs.”[ix]

Although Magda scoffed at prayer, she encouraged Alisoun to use her apprenticeship to develop her own skills as a healer, including her faith.

“All that goes before shapes thee.  Even thy habit of prayer.  Magda honors that.”[x]

Magda is quite willing to discuss her hesitancy to accept Christian beliefs with friends like Owen and John Thoresby, but in her wisdom she understands that these are not topics to discuss with everyone.  On more than one occasion she had encouraged her apprentice in her beliefs, and she does so with the young nun Marian in A Choir of Crows.  She astutely knows when it is time to say no more.

“Magda understands thou hast dedicated thy voice to prayers to thy god.  Is that so?”
“You speak as if you are not a Christian.”
“Magda honors all creation, and lives to serve.  Such a voice as Minstrel describes is not to be neglected.  Thou must care for such a gift.”[xi]

Marian took the bowl Magda offered to calm her and drank it down.
“My eyelids feel heavy.  You swore no spells.”
“Magda uses the earth’s bounty to heal.  No more, no less.  We are of earth.”
“Our bodies, yes.  But not our souls.  They are of God.”
This touched Marian’s fear [so] Magda did not argue, but changed the subject.  “A bit of broth now?  To nourish thy body.”[xii]

WhenMagda realizes Marian can not accept her comment, she knows there is no need to discuss this further.  Spirituality for Magda does not include, nor does it depend on religious dogma.  Furthermore, it is not exclusive so she is able to acknowledge another’s alternate conclusions and decisions.

When we first encounter Magda Digby in The Apothecary Rose, Owen Archer is investigating the mysterious deaths of two men who died in a similar manner in the minster hospital.  Rumors about one of the men lead Owen to Magda; he is surprised by her lack of curiosity.

“You did not ask my name.  Or the name of the woman who told me of you.”
“’Tis better not to know the names.  Get thee gone Bird-eye.  Magda does not need thy kind.”[xiii]

Not only knowledge, but also the art of listening and observing, seeking and offering a limited amount of information is at the heart of Magda’s wisdom.

“Say only what thou must.  Thou art here to listen.  Thou art a healer, not a spy.”[xiv]

“Thine opinion is naught but interference.  If thou wouldst care for her again, do what she asks and no more.”[xv]

When talking with the young nun Marian, Alisoun recalls Magda’s instruction to listen and be patient.

Alisoun almost dare not breathe, recalling that Magda would say, “Continue with them as thou hast begun.  Do not stop at the fact that thou didst hope to hear.  A deeper truth may follow.  Listen as long as thou canst.”[xvi]

Magda is not only able to hold her tongue, but she has an innate ability to observe and to reason out what her observations mean.  Owen is attempting to locate Jasper, a young boy who witnessed a murder and has gone into hiding.  A possible resource in the search for the boy is a man named Martin Wirthir.  Magda knows much of what goes on in and around York, so Owen asks her about Wirthir.

“You know Martin Wirthir?”
“Aye, Magda thinks she knows this man.  Pirate is what she calls the rogue.  Sounds like him.  Watches out for Jasper, though he’s not so good at it, being in hiding himself.”
“Who does he hide from?”
“He has come to Magda because she does not ask such questions.”

“Why do you call him Pirate?”
“’Tis something about him.  What does such a man, not a weaver, want in York?  Magda asks herself.  And why does he hide?  Ah, she thinks, perhaps he smuggles the wool that the King wants to steal from the merchants for his war.”

But after telling Owen what she has surmised about the man, she turns the focus back onto Owen.

“Thou art clever in thy bones, Bird-eye.  Thou hast put much together.”[xvii]

How often do we ask too many questions and offer too many opinions when folk just want to talk?  How often do we stop listening when we’ve heard what we wanted to hear?  How much self-discipline and control of one’s tongue is required to do what Magda does?  Not much escapes her.

Look for the final installment next week!

3 Comments on “The Wisdom of Magda Digby Part III”