Posted on June 3, 2021 by candacerobbbooks

As I write away on the 14th entry in the Owen Archer mysteries I am using small details and insights recently gleaned by re-reading two of the earlier books in the series, The Apothecary Rose (#1) and The

Cross-legged Knight (#8). It’s a strange experience to return to one’s own books as a reader. It’s long been a guilty pleasure for me to listen to the audiobooks of the series—new US editions of the first 3 and older British editions of the first 8, hearing the characters come to life. But until this year I’ve read the texts only in bits and pieces, searching for details to ensure continuity or, in the summer of 2015, proofreading old copy-edited typescripts. Reading for pleasure is another matter entirely. Earlier this year, with the idea that the arrival in York of William Wykeham, the Bishop of Winchester, might be the catalyst for the central murder in book 14, I decided to read The Cross-legged Knight as I do any novel, for pleasure. And it would refresh my memory of the story.

You see, though I recall the overall narrative arcs and the pivotal scenes in each book, I cannot be certain that my memory of just how the story played out in the final draft is correct. In the course of writing I create many scenes that wind up cut or heavily revised. I delete characters, change their names, sometimes their sex, remove incidents, reorder how the events unfolded, and, far more often that you might guess, change the solution.

To my delight (and relief) I enjoyed The Cross-legged Knight, and came away with a sense of Wykeham separate from Owen’s opinion of him. The experiment proved not only enjoyable, but useful. 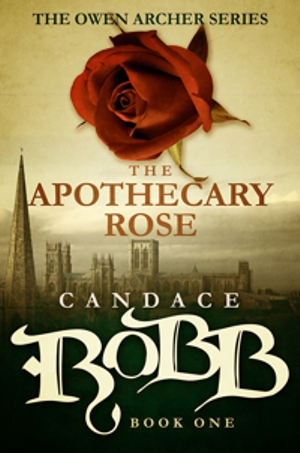 In April of this year a virtual book club in London (I love Zoom!) chose the first Owen Archer mystery for that month’s book, and I was invited to be their special guest. Having had such a good experience with one book, I chose to try reading The Apothecary Rose—a book I wrote 25+ years ago—for pleasure. Not only did I enjoy it, but I was excited to talk about it with the book club. In fact I had so much fun talking that I started losing my voice after an hour–well, that was partly seasonal allergies. Reading it after all these years was like looking through a family album and revisiting the past, dredging up snatches of memory, re-experiencing moments. Each night when I finished reading I would fall asleep to the dance of memories–how I chose a particular scene, why I added a little detail, why I changed someone’s name. With Owen’s and Lucie’s odd courtship fresh in my mind I’m able to hint at it in their conversations about another couple’s troubles in the current manuscript. Best of all, I came away proud of my first published book. Dear reader, I enjoyed it!

Serendipitously, both books have been selected for Kindle deals right now: The Apothecary Rose is a Kindle Big Deal in the US from Memorial Day to 6 June, and The Cross-legged Knight for a Kindle Daily Deal on 4 June—both $1.99. What a treat to see the book that began it all to be ranked 39 in Historical British and Irish Literature on amazon as I write this on 2 June 2021, just 3.5 months short of it’s 28th anniversary. That’s staying power. The Cross-legged Knight holds a special place in my heart as the last Owen Archer for which my British editor was the incomparable Lynne Drew—we had worked closely since the second book, and she also edited the first Margaret Kerr. If you’re in the market for the ebook editions of either or both, check them out on amazon!

← The Riverwoman’s Dragon: Cover Reveal
The Wisdom of Magda Digby (part I) →

5 Comments on “Re-Readings: The Apothecary Rose & The Cross-legged Knight”