Posted on March 11, 2021 by candacerobbbooks 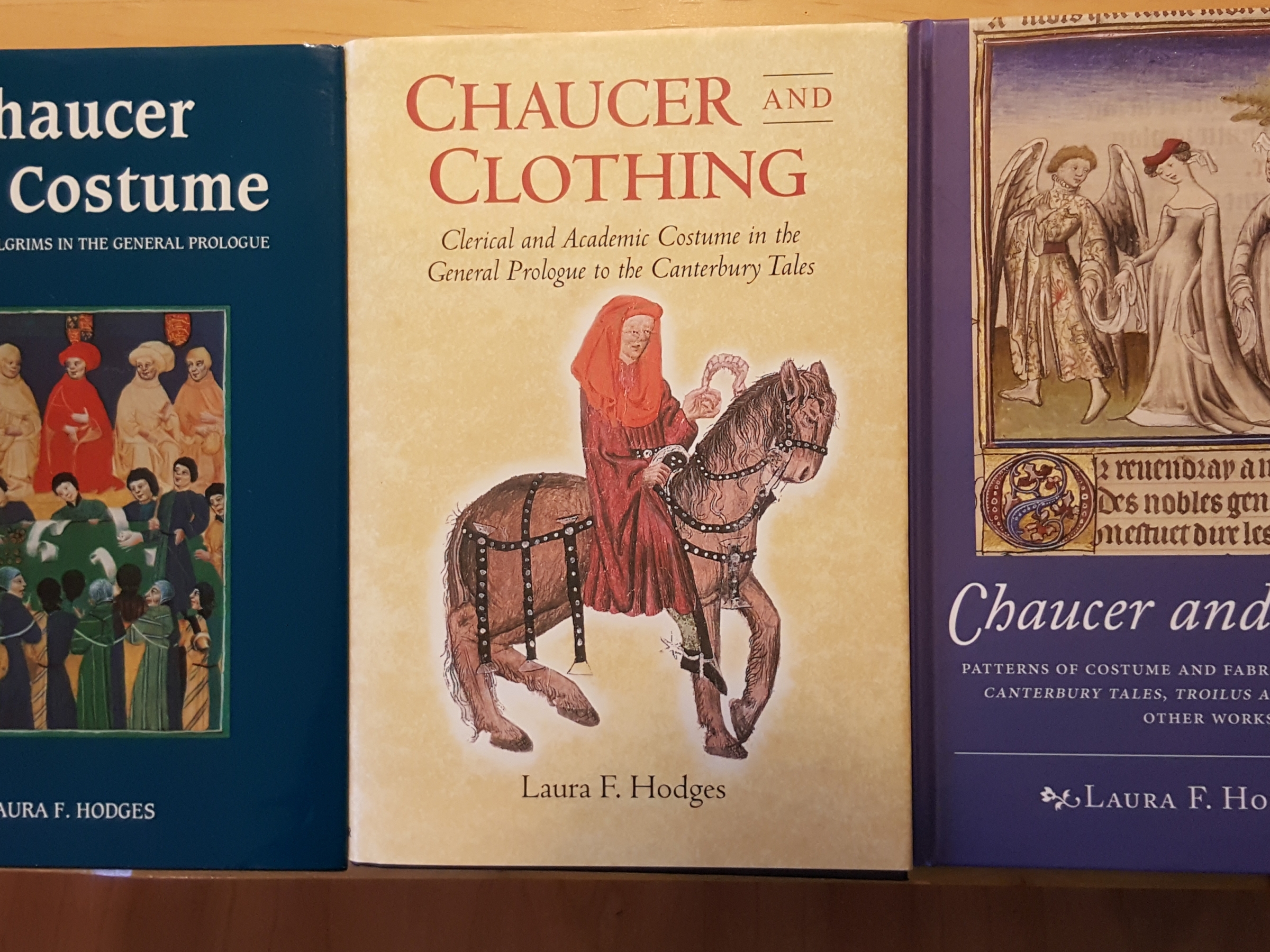 In Chaucer and Costume: The Secular Pilgrims in the General Prologue (DS Brewer 2000), Laura Hodges presents in wondrous detail how in “Chaucer’s descriptions of textiles, as well as styles, garments, and accessories worn by his pilgrims… [he] weaves a web of costume signs and fabricates characterizations.” (3) Laura knows something about using clothing to enhance a text, and that is why she has been my go to person regarding medieval clothing ever since we met. The following is an attempt to encapsulate years of rich conversations with Laura and her written thoughts about how those of us writing historical novels might emulate medieval writers to enhance our work.

Our first collaboration concerned gloves. For The Cross-Legged Knight (Owen Archer 9), I needed an item a tawyer might make with the small hides he prepared, an item sufficiently unique that it could be traced back to him, making him a suspect. Laura suggested gloves for all they would suggest about the owner and the circumstances in which they were found. Gloves had meaning? She recommended Gloves, their Annals and Associations by S. William Beck, published in 1883. I hunted it down online, ordering it from a small shop in the UK. It is a treasure I still hold dear, crammed with the history and lore of the glove. “In the history of dress, gloves stand out distinct, unique. True, some other garments have had part and lot in material affairs, and have been made indicative of weightier matters than mere wear and tear…in every several respect in which [other items of clothing] have been the outward and visible sign of hidden things, Gloves have outweighed them.” After an extensive history of the glove he provides chapters on gloves as pledges, gages, gifts, and favors. As I worked through this delicious tome, Laura helped me design the gloves.  From The Cross-Legged Knight: “Tucked at the back of the shelf was a delicate pair of gloves, made of butter-soft leather. …Tooled leather, with jet beads on the outer wrist of each…” Costly. Unique. They told a tale, not only becoming an integral part of the plot, but also tying together several themes and subtly enhancing the characters.

I leaned on Laura even more while writing The King’s Mistress, with Alice Perrers being the daughter of a cloth merchant, and marrying another. When she went to court, I wanted Alice to use her background to help dress the queen. Clothing was part of setting, character, and filled with symbolic meaning in the book. I would not have dared use it as such a strong theme without Laura’s guidance.

So I’ve recently engaged Laura in an extended conversation about how she moved from her work on the clothing in medieval literature to making suggestions for modern fiction.

Laura: I begin with the premise that in a work of fiction no description of costume should be gratuitous or a cliche’.  Each detail of literary dress should serve one or more purposes, be informative, and be capable of inviting interest.  The obviously seductive “Lady in Red” does well enough for a popular song title, but, standing alone, is trite and too obvious for modern fiction.  And when that fiction is set in the Middle Ages, the author needs to know a lot more about the color red than that it is an eye-catching hue.

William Langland (PP.B, Passus 2, l. 15) gives us the maid Mede in a “robe … full riche, of red scarlet engreyned.”  She is a lady in red for sure but also a good deal more.  Mede wears a “robe,” diction that shows up most often today in the term bathrobe, but which in the Middle Ages is not a single garment, but an ensemble worn at home and for social occasions, comparable to a dress or suit, topped by a cloak and hood.  Because “scarlet” is actually the name of a medieval fabric, the most expensive woolen woven in the 14th century, and because the fabric might have been dyed any color, Langland is not redundant in specifying red, as the actual choice.  But he is yet more specific in supplying the dye stuff used in the adjective “engreyned.”  He signifies here that Mede wears a most expensive robe of scarlet wool that is dyed with the most costly of red dyes, Kermes or Cochineal, derived from insects (Hodges, Chaucer & Costume, 175, n.57), as opposed to any number of cheaper red dyes, such as madder, available to cloth makers of the period.

The line is part of a tour de force costume depiction that epitomizes and allegorizes conspicuous consumption, excess, what Robert of Brunne, in Handlyng Synne, calls “Harlot’s attire” (ll.  3449-54).  Each detail in Langland’s poetic lines supports and illuminates this meaning to such effect that the narrator viewer of this array declares himself to be ravished:  “Hire array me ravysshed; switch richesse sauz I neuere” (l.17).

The fan of economic prose, perhaps, cannot imitate this reveling in riches that allegory enjoys.  Still he/she should note that the passage lacks repetition, indeed celebrates variety, even in its overload of details which elaborate excess.

Candace: You reminded me recently of a Marie de France tale, Le Fresne, in which a piece of embellished fabric identifies a child given away shortly after birth. What other examples are there?

Laura: The author of historical fiction can make an item of costume and/or fabric essential to the plot.  In Chaucer’s Troilus and Criseyde, the “broche of Thebes” (II. 1370-71)  is such an item.  Criseyde gives this brooch as a pledge of her love to Troilus, marking a significant step forward in the trajectory of their love.  For Criseyde the brooch provides an allusion to her family history and gives warning to both Troilus and readers of this story that tragic consequences form the context of this family keepsake.  Later, when Troilus gives a keepsake jewel to Criseyde before her departure from Troy, and then finds that she subsequently bestowed it upon the lover, Diomede, who succeeds him, this romantic betrayal signals the most cruel, cutting end of Criseyde’s love for Troilus (V, 1040, 1660-90; Hodges, Chaucer and Array 75-78, 83, n.75).

Candace: As with my pair of gloves in the mystery as well as a number of clothing items in The King’s Mistress, much of the story is in the details.

Laura: I agree. The medieval author of romance often enough provides an exotic and quite revealing provenance for the materials used in their characters’ costumes, a practice that might be useful today.  For example, note Benoit’s description of Briseida’s traveling ensemble as she leaves Troy:  it is made of enchanted fabric, produced through enchantment in “India the Great.”  Its colors are five or six times as bright as a normal lily. Such exaggeration of color indicates the depth of its dyeing process and consequent high value of the finished product.  Further, in the patterns woven into the fabric, there are seven colors used to picture all the beasts and flowers of the world. The provenance includes the source of the fabric: a gift from a wise Indian magician, a fellow teacher with Briseida’s father Calchas, who honored Calchas with this priceless treasure.

Briseida’s cloak made of this fabric is lined with Dindialos fur described as having no seams (seamlessness being a special characteristic, indeed, as it is a feature of Christ’s tunic).  In addition, the Dindialos is most difficult and dangerous to hunt, thus rare to capture. Still hunters risk death to acquire this very large beast for its exceptionally perfumed and uniquely colored fur, characteristics found nowhere else.  It makes an exotic lining for an enchanted fabric cloak — a magical bedecking of Briseida as she departs Troy to join Calchas, her seer father. These details reflect splendor on her as her father’s daughter, on him as the acquisitor and then giver of such a garment, as well as provide background information about their wealth, education, and worldly status.

The description is highly self conscious, meant to be ornamental and significant.  In this dress Briseida presents herself to the Greeks, her new hosts.

Candace: Any other thoughts about how to use clothing in historical fiction, especially set in the middle ages?

Laura: Modern authors might, as does Chaucer in his Troilus and Criseyde, include a major costume sign at each significant plot turning, constructing and deconstructing the sign pattern, as he does, as the plot rises and falls. But no one should sprinkle such signs about indiscriminately. Medieval literary garments regularly carried volumes of literary and allusionary meaning, a fact that writers of historical fiction should know and might imitate judiciously.

And I would suggest that the writer of modern historical fiction should never pass up an occasion to include a depiction of an iconographic costume. A primary example is that of Alice Perrers as “Lady of the Sun.”  Such a costume was actually worn by Alice and mentioned in chronicles, but never described.  Chroniclers do describe textiles and costumes when they wish to add luster to, or convey richness of staging to an event they are recording.  They appear to delight in the details.  But no extant medieval chronicle, or wardrobe account, describes Alice’s Lady of the Sun costume.  And why not?

It had to have been an outrageous public display of King Edward III’s mistress, arrayed in a king’s ransom, to properly portray the allegorical importance of the Sun. Such royal favor, displayed so blatantly, was scandalous and won Alice no friends at court. It was noteworthy in chronicles, but no details were provided. However, you as a modern author of historical fiction could and did remedy this lack.  What might the Lady of the Sun wear?

Candace: Correction, we remedied this lack. I recall how you kept returning to refine the description. I merely shaped the words and Alice’s emotions. Here, in Alice’s internal thoughts, is the description in The King’s Mistress—

“When all was ready I stood in awe of the robes, the sheer spectacle in which I was to be one of the central figures. My gown, like Edward’s, was cloth of gold. The background, or warp threads, were red silk and the foreground, or weft threads, were the most delicate gold wire. Red was for the rubies associated with the sun. Once cut and fitted, our gowns were embroidered with gold thread, sunbursts surrounding balas rubies and diamonds, which were also emblematic of the sun. Even my mantle was of cloth of gold, caught in back to free my shoulders and reveal the lining, the reverse of the gown, gold background with red foreground. From my neck to the low-cut top of my bodice, I wore gold tissue so fine as to be almost invisible, sprinkled with large rubies and diamonds set in gold sunbursts, as if even my flesh were transformed. For once I might feel like his queen as I stood by Edward’s side.

“On the morning of the procession my heart beat so fast I felt faint, all my earlier misgivings returned. It did not help that the elaborate headdress, of gold tissue built up to create a sunburst around my head, had to be firmly fastened to my hair, which was coiled beneath, to prevent it from taking flight. I felt the pricks whenever I made a sudden movement. Gwen needed six assistants to dress me. My hair, skin, everything, was covered in gold cloth. Finally the women stood back from me, their eyes wide. The sempsters, standing by to make last minute repairs, applauded.”

Laura: Perhaps this costume was even more extravagant than this?  We will never know. It remains a costume that we may only imagine.

Candace: And although historians now question whether the procession actually occurred, I stand firm in believing that it did, and was the final straw for those desperate to wrest Alice from the King’s side.

And therein lies the tale.