Posted on February 3, 2020 by candacerobbbooks

Fans of the Owen Archer series have worried that the long hiatus between the publication of A Vigil of Spies and A Conspiracy of Wolves would now be repeated. Fear not, readers! I’m delighted to report that I’ve delivered the manuscript of the 12th Owen Archer mystery, to my publisher, Severn House. My editor’s comments:
“… a wonderfully compelling, intricately plotted mystery, which also offers a fascinating insight into day-to-day life in the late 14th century – a dangerous, plague-ridden world, where life was often harsh, brutish – and cut unexpectedly short.  A world dominated by the all-powerful Church and its attendant politics:  I particularly liked the vivid evocation of a bustling, thriving York Minster in its medieval heyday, which forms the backdrop to so much of the action.  As with A Conspiracy of Wolves, the stunning city of York is brought vividly to life during a particularly turbulent time in its richly colourful history, as the obscenely powerful Percy and Neville families battle for advancement, and almost every citizen seems to be a spy for one faction or another – with Owen and his family caught in the middle of the lethal power games playing themselves out.”

I think she likes it!

So now, without further ado, I present the gorgeous cover, and my publisher’s description of the contents.

December, 1374. With the great and the good about to descend on York for the enthronement of Alexander Neville as the new archbishop, the city authorities are in a state of high alert. When two bodies are discovered in the grounds of York Minster, and a flaxen-haired youth with the voice of an angel is found locked in the chapter house, Owen Archer, captain of the city bailiffs, is summoned to investigate. Tension deepens when an enigmatic figure from Owen’s past arrives in the city. Why has he returned from France after all these years – and what is his connection with the bodies in the minster yard and the fair singer?

Before Owen can make headway in the investigation, a third body is fished out of the river – and the captain finds himself with three mysterious deaths to solve before the all-powerful Neville family arrives in York. 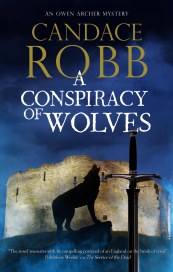 Meanwhile, if you’ve been waiting for the trade paperback of A Conspiracy of Wolves, it is now out in the UK, and will appear in the US & Canada 7 April!

This site uses Akismet to reduce spam. Learn how your comment data is processed.