Q&A with Kim Zarins, author of Sometimes We Tell the Truth

Posted on October 8, 2018 by candacerobbbooks

I am delighted to introduce you to Kim Zarins, author of the YA novel Sometimes We Tell the Truth (Simon Pulse, Sept. 2016), a brilliant retelling of Geoffrey Chaucer’s Canterbury Tales in a contemporary setting, with the “pilgrims” as high school seniors on a class trip to Washington, DC. I loved the book when I read it two years ago, and I’m enjoying it even more on my second read. Or is it my third? (I’ve been chasing her down for this blog post for a few years. Each year at Kalamazoo she promised soon!)

I first met Kim in 2003—eons ago!—when my friend Paul Hyams invited me to spend 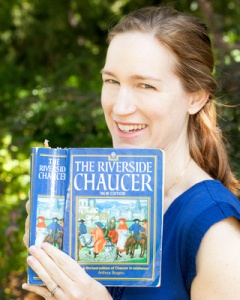 a few days at Cornell University talking to grad students and giving a public talk on the ethics of historical fiction. Kim was one of the grad students I met, working on her PhD in English Literature. She earned her PhD in 2009 while teaching at Cornell, then Santa Clara University, and San Francisco State University. Since 2009 she’s taught at California State University at Sacramento where she’s currently Associate Professor of English. Now here’s the kicker—when she contacted me several years ago, on Twitter, as I recall, I knew at once who she was. She’d made such an impression on me all those years ago at Cornell.

So, without further ado, here’s our conversation:

Kim: It was the right choice for me for many reasons. I love reading historical fiction, but I couldn’t (and can’t) see myself writing a medieval retelling of Chaucer’s Canterbury Tales. I fear I’d get bogged down in researching cobblestones and privy logistics and just feel unqualified at capturing medieval London and the road to Canterbury. Similarly, while I adore Middle English, I didn’t want to wrestle with diction that sounds too ye olde Engelonde-ish. In truth, I didn’t want to convey the medieval atmosphere of Chaucer’s text so much as the characters and stories themselves, the themes that speak to us as clearly as they did back then—meeting people who are different from you and listening to them, being in love, standing up for yourself, facing uncomfortable truths. Modernizing the tales removes all the medieval atmosphere, and since a modern setting doesn’t bear much analysis for modern readers (it’s just teens on a bus riding along with the occasional coffee break), I can keep the focus on the internal growth of the characters and the storytelling dynamic.

Candace: And why teens?

Kim:  Chaucer’s characters are so much larger than life, as well as works-in-progress, and their passionate natures and vibrancy just seemed to make them perfect as teenagers, and the medieval sense of hierarchy and type-casted roles seem not all that different from the high school scene. I love the unabashed coming-of-age narrative we get in kids’ and teens’ books, and I could focus on the characters’ deep feelings and budding insights, while remaining true to their limited viewpoints. I really loved having this toy box of amazing characters to play with. I think if I were writing Geoffrey Chaucer, Father of English Poetry, I’d freeze up and not dare remove him from his pedestal, but Jeff Chaucer the shy teenager was a wonderful and accessible narrator, so frustratingly flawed but so real and relatable. I also loved the idea of meeting Chaucer’s pilgrims as teens, especially the Pardoner. There’s something redemptive about meeting the Pardoner as a teen and seeing if I can shift something so he doesn’t have to grow up and be a bitter, despairing villain. Finally, I loved the idea of writing to a teen audience and sharing these relatable stories, and hopefully spread some Chaucer love to the next generation.

[Candace jumping in to say I was so moved by Pard/the Pardoner. I felt you’d delved into the heart and soul of a character Chaucer had been just sketched in to suit his purpose and you brought out his depths.]

[Kim jumping in to say Thank you so much! He was the character I worked on the most and the only one who voiced opinions about his own centrality in the novel. No marginalization for this Pardoner! I loved working on every scene he was in.]

Candace: As a writer I’ve wondered whether some of the tales and the pilgrims were easier to modernize than others.

Kim: Not to sound complacent or braggy (believe me, I know about writer’s block!), but some pilgrims and tales were very easy to write. This is partly because I teach Chaucer, and I try to make modern parallels for my students. For example, I make references to Twilight, or my students consider how the characters would talk if they were on Twitter. The pilgrims’ voices are so distinct—the Miller talks only like the Miller, and so on. This really helped my characters have their own voice and not bleed into one another’s. And knowing who they were helped with writing their tales, with an eye to their personalities but also Chaucer’s original tales.

When I sketched an initial outline, a modern concept would spring to mind, and the tale then would write itself. For example, The Knight’s Tale with those two Theban princes revived from the pile of corpses is just *obviously* a zombie love story, right?! And The Franklin’s Tale involves a magician willing to help a young man get a woman through a magical demonstration—the whole situation is creepily Slytherin, so the path was clear there too. I confess the fabliaux were straightforward to write, and I kept the scandalous content but provided a lot of criticism from the women on the bus (a lot of Chaucer’s male characters had to become female, because otherwise it would be a really weird demographic—it just shows how outnumbered the Wife of Bath and Prioress really were).

Other tales were more difficult. The Clerk’s Tale is just painful and The Prioress’s Tale is horribly anti-Semitic. I didn’t see how the modern Prioress could tell a story like that and not get kicked off the bus. The other thing that was hard was that I knew I wanted the Canon’s Yeomen to make an appearance, but working him in took a lot of plot points and backstory. He was the most challenging. Still, I really wanted a complete cast, so it was worth it!

Candace: Did the tales or the characters come first–that is, did you modernize the pilgrims and then think about how to modernize their tale, or did it go the other way, or vary? I love hearing people talk about their writing process.

Kim: The characters came first. While I was writing drafts of my General Prologue, I was also writing out character descriptions. I made an Excel spreadsheet for seating arrangements based on social hierarchy (cool kids in the back, nerds in the front row), and another for the character traits and which colleges they were planning to attend, what cars they drove, etc, just so I could know more about them before I directed attention to their stories.

Candace: When teens read the book, what sorts of questions do they ask about Geoffrey Chaucer and the medieval setting? Do they ask any?

Kim: From what I can tell, most teens are surprised that it’s a Chaucer retelling. Any Chaucer-savvy reader can see the references a mile away, but because it’s a modern retelling, it’s not at all obvious to someone unfamiliar with Chaucer. The novel simply reads as a contemporary story. So I’ve heard many teens remark that they were surprised that in the Afterword I call it a Chaucer retelling—and explain what I did—and they express an interest in reading Chaucer. I love to hear that!

Perhaps the coolest Chaucer discussion I’ve ever had with teens was at the Chaucer Celebration at Arizona State University, where I was invited to read from my book to over 100 high school students, many of them from Title I (low income) schools. The students had prepared for the event by reading The Franklin’s Tale, a tale of magic that originally came from Giovanni Boccaccio’s Decameron. I read my modern version, which comes across as Harry Potter-fanfiction. Before I read the excerpt, I told the students that my tale is Chaucer fanfiction of Chaucer’s Boccaccio fanfiction, all framed as Harry Potter fanfiction! After the reading, some high school students came over and wanted to hear more about Boccaccio’s winter garden and how I was playing with Boccaccio instead of going with Dorigen’s “grisly feendly rokkes blake” (I love saying that phrase aloud). The teens were eager to read Boccaccio’s tale and see for themselves how Chaucer adapted it for his purposes. We actually talked more about Boccaccio than Harry Potter, which is kind of shocking! One cool thing about that discussion was that teens really get how awesome fanfiction is, so when they find out Chaucer was doing the same thing, it intrigues them. If Harry Potter is the gateway drug to Chaucer and Boccaccio, so be it!

Candace: Do you think of the school trip as a kind of pilgrimage? or is it the occasion of group travel that’s the parallel?

Kim: The trip to Washington D.C. is a secular analogue for Chaucer’s religious pilgrimage to Thomas à Becket’s shrine. It’s also a right-of-passage for many junior high and/or high school students. It seems like a transition marker and a potentially transformative trip. For me the group dynamic is the key part of the real pilgrimage, rather than the physical destination. I don’t spend much time on Washington D.C. itself, because that’s the curricular pilgrimage, the occasion for the whole thing, but the spiritual pilgrimage is really about this group of teens who learn to listen to one another and rethink one another’s stories and their own.

Candace: What more can I say except you MUST read this book. Whether or not you remember the Canterbury Tales, you will fall in love with Kim’s characters.

NOTE: And for any high school teachers reading this, if you’d like desk copies of the book, Kim invites you to contact her through her website http://www.kimzarins.com/

Kim: Thanks, Candace! This was awesomely fun!

Candace: For me as well!

2 Comments on “Q&A with Kim Zarins, author of Sometimes We Tell the Truth”