Posted on March 27, 2017 by candacerobbbooks 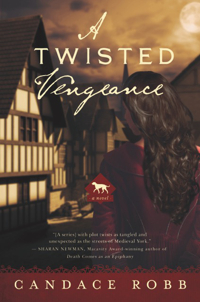 I was not going to check my phone this morning until my second cup of tea–silver needle, so delicately fragrant, sip and enjoy and watch the birds discover the sun’s out in the garden. But halfway through the cup I had this urge to check my email. I saw one from Jennifer, my agent, the subject: I’m seeing stars in the PW review! Followed by a reply from my editor, Maia. How could I not open that email? And here’s what I discovered! A starred review for A Twisted Vengeance, Kate Clifford #2!

If you don’t want to click on the link, I’ve provided the text below. But really, you do want to go to PW online and see that red star!

Lovers of Shakespeare’s Richard II will find Robb’s intricate sequel to 2016’s The Service of the Dead a particular treat, as it charts the course of Richard’s downfall and his cousin Henry of Bolingbroke’s rise through the fears and uncertainties of the residents of the city of York in July 1399. These anxieties are worsened by a series of strange deaths connected to the extended family of Kate Clifford, a fierce young widow struggling to cope with not only her own household of jostling servants and the recently arrived illegitimate children of her late husband but also the return of her quarrelsome mother, Eleanor, from Strasbourg with religious women in tow. The character of Clifford is compelling and finely drawn, and for those readers who are patient enough to manage an unusually large number of secondary characters, the answers to a series of mysteries, starting with the reason for an intruder’s attack on a beguine (or poor sister) in the middle of the night, are highly satisfying. Agent: Jennifer Weltz, Jean V. Naggar Literary Agency. (May)

← Snippets about Writing & Fairy Tales
I Hope to See You! →

4 Comments on “A Twisted Vengeance, A Starred PW Review!”