Shop Talk with Patricia Bracewell, author of The Price of Blood

Posted on July 6, 2015 by candacerobbbooks 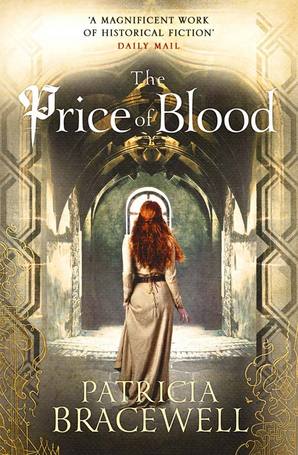 Bracewell’s trilogy about Emma of Normandy, The Price of Blood, I’m delighted to welcome Pat back to A Writer’s Retreat for another Q&A [see the link to her previous visit at the end].

As I wrote for the US (Viking) publication of book 2: In The Price of Blood, Patricia Bracewell proves once more that she is an alchemist. She turns the leaden chronicle accounts of Emma and Aethelred’s embattled kingdom into a narrative thrumming with life, the historical figures heartbreakingly human. The epic battles of the Anglo-Saxon are rendered personal, tragic. The fated characters disturbed my sleep and haunted my walks. You have been warned.

Welcome, Pat! Let’s start with a few questions specifically about this book:

Q: When working on The Price of Blood did you experience anything that felt like a particularly “middle book” issue?

A: My agent and editor were very keen on making sure the book could stand alone,

so I had to bear that in mind while at the same time dealing with my own concept of this as the middle section of Emma’s story. I suppose that kind of double perspective is a ‘middle book’ issue of sorts. My critique partners had not read the first book, Shadow on the Crown, so they were very good at pointing out areas where a reader needed more back story to understand what was going on, and that was an enormous help. They made sure that I gave enough information about previous events and relationships between the characters to keep new readers engaged without slowing the story for those who had read the first book.

Q: You mentioned during the author Q&A at Kalamazoo that at some point in writing The Price of Blood you realized you didn’t have time to reach the year you’d intended. Could you talk about that a bit? What was involved in reorganizing the book?

A: I wanted to conclude The Price of Blood in December, 1013 because of some dramatic events that occurred in that year and that would have provided a tense, cliff-hanger ending. But so much happened in that year that I knew it would take me another 100 pages to describe it all, so I had to let go of that idea. As a result, I had to re-think my story arc and invent a new climax. It meant re-working the story so that a particular character – I’m not saying who – played a larger role than I’d first given him. I had to add some new scenes, delete others and re-write what became the final two chapters about, oh, thirty-five times. The story itself didn’t change, but the emphasis on certain characters and events did.

Q: You’ve just completed an extensive book tour for the US release of The Price of Blood, affording you a fresh opportunity to meet your readers. Did you learn anything from them about how your books are received? Did they tell you who were their favorite characters? Did any ask “what’s next for” a character? Or why something happened to a character?

A: That didn’t happen much at book store events – I suppose because we tried to avoid discussing specific characters and incidents for fear of spoilers. It happens a lot, though, when I meet with book groups. I sometimes ask them who their favorite characters were which has resulted in heated discussions about the challenges faced by Emma and Elgiva and the different ways that the two characters handled them. I love it when readers react so strongly to my characters.

A: I wish I’d made it to the end of 1013 in The Price of Blood so I wouldn’t have so much to write now! Seriously, there are no regrets. Just the opposite. I’m quite grateful that I invented some characters for the second book – characters that weren’t part of my original plan – because I’m finding plenty of opportunities to use them in the book three.

Q: Is there anything you learned with the second that you’re bringing forward into your work on the third?

A: I’ve learned that I have to loosen my grip a bit on my characters and on the scope of the story. It’s still Emma’s book, overall, but it’s broadened. Elgiva has stepped forward significantly, and in The Price of Blood her character took on a life of its own that I’d never intended in my original concept. She went places I didn’t expect, and of course that has opened up more possibilities for the next book. I suppose it’s a matter of thinking outside of the box that I originally created for myself, and being willing to give my imagination free reign to explore ideas that weren’t part of my original plan.

Q: With time and familiarity your feelings about some characters may change—understanding deepens, quirks grow either more annoying or more endearing—could you talk about that? (Or am I generalizing something that’s peculiar to me?)

A: I think you’re absolutely right. Not with every character of course. I think the best example of that for me is Elgiva. It’s hard to explain it because she’s almost entirely a figment of my imagination. Whatever she is – I’m responsible for it because we know so little about the real person. The thing is, when I created her she was something of a monster – selfish, bossy, and ambitious. She was so bad that I loved torturing her. But in the second book she took whatever I threw at her and exhibited an admirable resilience. Maybe my subconscious took over and gave her that quality – made her so tough that it became a strength. Even as I write the answer to this question it’s occurring to me that she reminds me now a little of Scarlett O’Hara, but I promise you, she didn’t start out that way.

Q: In a similar vein, I’ve found that characters begin to dictate to me what they’ll do and how they could best be utilized. Do you find this happening, particularly after you’ve written about them in other books?

A: Certainly, as I mentioned above, Elgiva has done that. There are minor characters too – the king’s daughter, Edith, comes to mind – who have grown into larger roles that I found quite useful. In the third book I’ll be revisiting characters in Normandy who didn’t appear in the second book at all, and it will be interesting to see how that all plays out.

Q: Emma of Normandy is clearly the central figure of the trilogy, but you tell the story not only from her point of view but that of others. How do you choose the additional points of view? Are there any steps you consciously take to ensure that the reader remembers Emma’s centrality?

A: I chose the viewpoint characters very carefully, with an eye to telling pieces of the story that Emma could not witness, but also because I wanted to add conflict by playing them off of each other: Aethelred vs. his son; Emma vs. Elgiva. Really, any combination of those four characters squaring off against each other, even though they may not do it face to face. For example, Elgiva is still an antagonist of the other 3 in The Price of Blood, but she never shares a scene with any of them. As for ensuring Emma’s centrality, it’s very low-tech. I actually count the number of each characters’ viewpoint scenes and make sure that Emma has the most!

Q: Is there a particular point of view character you especially enjoy becoming?

A: That would have to be Emma. I believe that the early historians who commented on Emma’s role in history never even attempted to put themselves in her place as a woman, a foreign bride, a mother, a queen, or, eventually, a widow. It’s only in the past several decades, as more and more women have entered the field and have begun to research that period of history that scholars have attempted to imagine the difficulties that Emma faced. Pauline Stafford, in particular, has been instrumental in raising these issues. With her groundbreaking work as my model I try to illustrate the complexities of Emma’s position, to step into her character and imagine the world as she would have known it, the difficulties that she faced and the heart-breaking decisions she was forced to make.

Q: Would you share with us five things that surprised you in your research about Emma’s era?

A: Free schools existed in England at this time, first begun in the 10th century by King Alfred of Wessex. They disappeared at the time of the Norman Conquest and would not reappear until the Elementary Education Act of 1870, almost a thousand years later.

Wives and daughters could inherit and hold property separately from their husbands or fathers.

Women could leave property in their wills, and often bequeathed land, clothing and jewelry.

The two archbishops in England, Canterbury and York, were appointed by the king, not the pope. Nevertheless, upon their appointment they had to make the expensive, arduous trip to Rome to receive their pallium, a white stole that was the symbol of papal authority. There was some grumbling about having to make that difficult journey.

An organ was installed in the Old Minster in Winchester in the year 994. It was the largest organ in England and needed 70 men to operate it.

[Imagine the task of calling together 70 pumpers not only for an event in the minster, but when you wanted to do a final practice!]

Oh, I do so love to talk shop. Thank you for answering all the questions I threw at you, Pat! But perhaps I’ve missed a question you, the reader, are burning to ask about Emma of Normandy. So ask away in the comments, and I’ll forward your questions to Pat.

One last note: if you haven’t yet picked up copies of Shadow on the Crown and/or The Price of Blood, well, I just have to ask, what are you waiting for?! And do check out Pat’s website: www.patriciabracewell.com