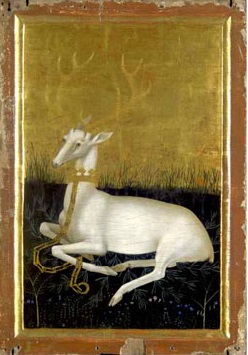 On the last day of the International Congress on Medieval Studies at Western Michigan University, I attended three sessions sponsored by the Society of the White Hart, which is always a high point for me as it tends to be in these sessions, focusing on the 14th and early 15th centuries, that I glean the best bits for my books. And I often present papers in their sessions, the better to get feedback.

But first, let me point out that the White Hart was Richard II’s emblem. When you read Emma’s A Triple Knot (40 days to publication!!!!!) you’ll learn that it was very special to his mother Joan. This is the figure as it appears on the Wilton Diptych, commemorating Richard II’s second marriage.

Richard’s first wife, Anne of Bohemia, was the topic of the first paper in the White Hart sessions. Lynn Staley talked about how Richard’s queen tried to make use of political culture to win support for her husband. But the deck was stacked against her–she came with no dowry–in fact, Richard loaned her brother 1200 pounds, which was quite a large sum in the late 14th century, and in their 12 years of marriage they produced no heir to the throne. But she worked hard to support her husband. Anne’s surviving letters show her emphasizing the happy harmony of their marriage, and playing up the successes of the realm’s young king, her husband. Alas, the nobles never warmed to her. She was given a voice by the poets she welcomed to the court–the 14th century queens understood the importance of the arts in celebrating their reigns. Queens Isabella and Philippa were both enthusiastic patrons of the arts. Philippa and her daughters were depicted on the walls of St Stephen’s in Westminster. In my notes I jotted down that “Joan of Kent was more of an enigma”. I can’t recall why I wrote that down! My problem is that the more fascinating the topic, the lousier my notes–I just sit back and listen.

Phillip Morgan spoke about the Dieulacres Chronicle on the disposition of Richard II. The choice bit that I made a note to learn more about was a comment that the Forest of Wirral occupied the mind of the Black Prince on his death bed.

Rhian McLaughlin, in a paper about gentry violence against crown officials in 14th century England, pointed out that it’s quite rare that all documents related to a case survive, and what does survive is often written in quite generic language, a sort of shorthand, so the details are often lost. Which is why it can help to literary works to understand contemporary opinions/values, in this case, medieval outlaw literature–Robin Hood, the Tale of Gamelyn. What she has gleaned combining the two is that the gentry saw violence as a tool to be used alongside the law to gain attention and status. By demonstrating his power locally a minor noble might be noticed by the crown–in a positive way. Performative violence–I smile at the term, but I find it a fascinating concept. There was, of course, no guarantee of success, but it didn’t harm their reputations or status. So the violence was for profit, but not always financial.

John Leland noted that Richard II wanted to be seen as prudent, wise, not a warrior. He modeled himself on Robert of Naples, focusing on statecraft, not warcraft. He saw wisdom as a sign of divine grace.

In the afternoon session, John Lee talked about English fairs in the 14th century, dividing them into major international fairs, regional fairs, and local fairs. It’s interesting that we have few depictions in art of English fairs. He showed an illustration of a Brabant fair with long lines of tents, much more orderly than I have imagined. He reminded me of a website I’d forgotten about: http://www.history.ac.uk/cmh/gaz/gazweb2.html, which is a gazetteer of markets and fairs in England and Wales to 1516. Check it out!

Chris Given-Wilson, who is working on the Yale Monarch Series biography of King Henry IV, seriously tempted me to move my focus in crime to the early 15th century. His talk “Common People and Chivalric Violence in Early Fifteenth-Century Chronicles” had me jotting down ideas for characters. His point was that the wars of the first 6 years of Henry’s reign were the peoples’ wars–coastal raids, piracy, the “heroes” often shipping merchants who were fed up with the lack of action from the knights and took matters into their own hands. It was an age of rumors, prophecies, popular politics. Such material!

Linda Mitchell is the woman to go to about powerful women in the 14th century, and her talk this year did not disappoint: “Eleanors and Isabellas: Queen and Chronicles from Matthew Paris to Thomas Walsingham.” Queens’ activities were deliberately excluded from chronicles, except regarding their marriages/coronations, the birth of the heir, and their deaths. Chroniclers did chatter more about queens involved in disruption–like Isabella. Which is why we know so little about them.

Oh, I almost forgot–George Stow convinced us all that Walsingham did not write both versions of what we call Walsingham’s chronicle. Well, at least he convinced me, and all the speakers who followed him couched their references to it in quotes.

Sorry my notes are so scattered, but you have a taste of the amazing amount of information one tries to absorb in 3 1/2 days!